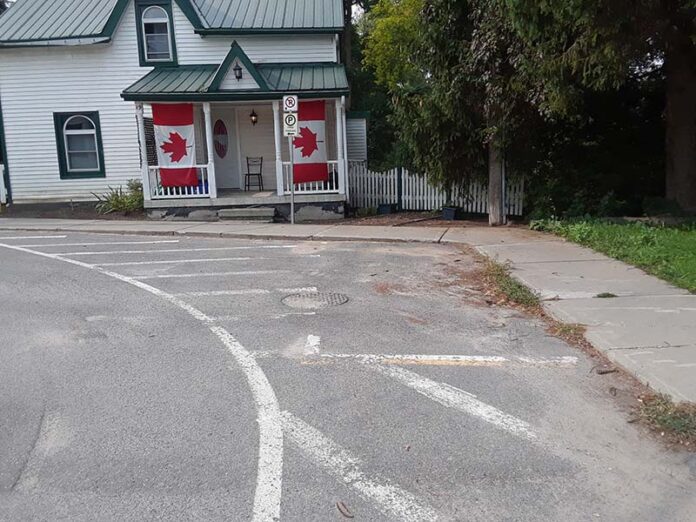 Parking in downtown Kemptville has always been a problem; but even when someone finds a space, things don’t go smoothly. Recently, a business person in the downtown needed to find parking on Reuben Street, a notoriously hard place to find a spot. But there one was, right at the angle past the Post Office where the street takes a right angle turn to head towards the Legion. His luck was in, and he parked a pick-up truck in the vacant space.

Imagine his surprise when he came back later to find a ticket on his windscreen. Illegal parking in a signed parking space? He knew this was a mistake by the by-law officer, and he went to the office to explain. But the bylaw officer denied there was a parking space there: an obvious error. As the photograph shows, the space exists right up in the corner, and the No Parking sign near it clearly shows that the no parking area begins to the left of the space. But the bylaw officer refused to admit this, and became quite aggressive when pressed. Instead, he told the unfortunate vehicle owner, he would have to go to the court in Brockville to plead his case, or else pay the $25 fine there and then.

The argument was that, once a ticket is issued, even in such a blatantly mistaken situation, it could not be cancelled in North Grenville, and a trip to Brockville was required. Given the choice of missing a day’s work, paying for gas and parking in Brockville, the driver decided to just pay the $25 and get it over with. But he was far from pleased at having to pay a fine for parking where a parking space was clearly marked and available. He had not stayed parked for longer than the allowed period, so he felt quite aggrieved at his situation.

There are a number of worrying features about this story. The first is simply that a bylaw officer, tasked with handing out tickets for illegal parking, should know where those parking spaces are. In this case, he obviously didn’t, and refused to accept the evidence provided that the parked truck was in the legal space. Then, while insisting that the driver pay the fine, or spend a day going to Brockville and back to argue his case, he also insisted that there was no way for the ticket to be cancelled once it was issued. Why cannot a local official cancel a locally-issued ticket?

I believe the driver is simply looking for an apology and a statement acknowledging that he was in the right in this case. He is not looking for compensation, or to get his $25 back. It seems the least the municipality can do. A local business person, trying to survive in business during a pandemic, hardly expects his own municipality to add to his woes and expenses, especially when he had done nothing wrong.