By 1791, the number of Loyalists refugees living west and south of the Ottawa River had risen to around 10,000. They had suffered greatly, not only from the loss of all they had before the Revolution, but also in the circumstances in which they found themselves as they literally carved out a new home north of the Saint Lawrence. To make their situation even less acceptable, they found themselves living under the French system of land tenure and subject to French civil law, with no representative Assembly through which they could voice their grievances.

Petition after petition was sent to the Governor, Lord Dorchester, to be forwarded to London demanding the rights of free-born British citizens. The Government in London was already looking for a way to mollify British subjects in North America without alienating the much larger Canadian population of Quebec. Ever since the British had replaced the French regime in 1763, this tension had been rising and British officials had managed to maintain some balance by ruling through the Governors without any Assembly.

In the five years after the Loyalists began to settle their new lands, the British had been asking Dorchester for reports and suggestions as to what would satisfy the Loyalists, but the Governor was unwilling or unable to come up with practical suggestions. In 1789, a new Secretary of State was appointed with responsibility for the Colonies, and William Grenville was not a man to wait for others to provide him with ideas. By the end of the year, he had drawn up a draft Bill to deal with the situation in Quebec.

Grenville’s most radical initiative was to divide the Colony of Quebec into two separate provinces. The territory west and south of the Ottawa, as far as Lake Huron and the Niagara region, would become the new Province of Upper Canada, while that to the east would be Lower Canada. Upper Canada, to satisfy Loyalists expectations, would be granted its own Legislative Assembly, representing the citizens of the Province, while a Legislative Council, rather like the House of Lords in Britain, would be appointed by the Governor who would govern as the King’s representative, with the advice of his Council. The land tenure system would change to that of Britain, replacing the French Seigneurial system that was unacceptable to the Loyalists.

The constitutional structure of the new Upper Canada was based on that of New Brunswick and Cape Breton, which had been established in 1784 to cater to the Loyalists who settled there. This was something that the Upper Canada Loyalists had been seeking: the same rights and privileges of British citizens that had been granted to their fellow Loyalists in the Maritime region. However, the British authorities were determined that any new Assembly established in Upper Canada would not have the same potential for disruption and revolt that had attended those of the Thirteen Colonies that had led to American Independence.

To that end, the role of the Legislative Assembly was quite limited, with the Governor and his appointed Council having the greater power. The role of taxation in bringing about the Revolution was also taken into account in the new Bill through establishing areas of each township to be surveyed in Upper Canada to be assigned to the Crown and the Clergy. Revenue from the same or lease of these lots would provide the Governor with a certain freedom from the need to overtax the Loyalists.

One aspect of the Bill which seemed to have slipped past the attention of the authorities concerned the franchise that would be granted to residents of the new province. Those who were declared to be eligible to vote in Assembly elections were described as “persons” who were at least 21 years old and “natural” citizens or subjects of the monarch who had not been convicted of a serious criminal offense or treason. Voters were also required to own land or property of a certain value, though those who rented at a certain rate in urban areas were also included in the franchise. Property valuations were quite low, leading to a wider franchise than might have been expected, but this was necessary in a society where basic land clearance had not progressed very far. But, by defining the voter as a “person”, the new Act opened the way for women to have a vote, as long as they owned property of the required value. However, because of English Common Law, this freedom was not enjoyed by women in Upper Canada. This aspect of the new Act was amended within a few decades to remove the vote from women under French civil law in Lower Canada also.

Grenville sought Dorchester’s input into the Bill before it was finally drafted as the Constitutional Act, but the Governor had little to add to Grenville’s vision. After some desultory debate in the House of Commons, the Act received royal assent in June, 1791, and came into effect on December 26. Upper Canada received its first Lieutenant Governor, John Graves Simcoe, who arrived in the new province in 1792. Lord Dorchester remained as Governor General of the two provinces until he resigned in a dispute with the Secretary of State in 1794.

But the new Province of Upper Canada had arrived, a new entity which would last for just fifty years before it was rejoined with Lower Canada in 1841. With Confederation in 1867, it became the Province of Ontario. It all started with an attempt to cater to just 3,000 Loyalists looking to make a new home north of the Saint Lawrence, 230 years ago. 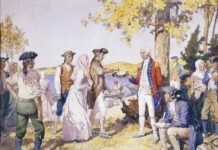 The Making of a Province: Political refugees 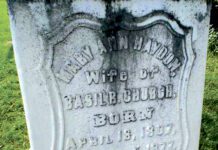 The Settlement that passed us by: Part 3