As we celebrate the 150th anniversary of Confederation, Lions Club members also celebrate a century of service. The first Lions Club was established in Chicago, Illinois, in June of 1917 and, since then, has grown to over 1.4 million members in over 200 countries.

Canada has been an important part of the Lions movement almost from the beginning. Lions Clubs became an international organization when its first club in Canada was chartered in Windsor, Ontario, in March of 1920. Since then, the Lions Club has grown to hundreds of local clubs serving every part of Canada.

Canada Day is the start of a new Lions year and, this year, the Kemptville Lions Club marks its 60th year of service to this community. The club started in 1958 and was sponsored by the Merrickville Lions Club. Their 60th anniversary will be formally celebrated on April 28, 2018.

Service by the club is provided in many forms. Lions members can be seen helping out at blood donor clinics, entertaining in nursing homes, collecting eyeglasses, and assisting in sight clinics abroad, etc. An important role that they also play is in raising money to donate to local organizations. In fact, most people probably associate the Lions Club with their fundraising campaigns. In the past, the club was known for their baseball tournaments, and then the bingo hall. In recent years, people think of Christmas trees, Easter bunnies, and lotteries (the Canada Day 50/50 draw and now, “Catch the Ace”).

The organizations that benefit from their fundraising include hospice and home care, the Youth Centre, bursaries for students going on to higher learning, the Kemptville and District Hospital, CHEO (over the years, the Kemptville Lions Club has contributed more money to CHEO than any other single service club), and Camp Quality (a local summer camp for children battling cancer). They have also contributed to local facilities, including the North Grenville Municipal Centre, the swimming pool, and the new library.

On Canada Day, the club will be involved in the Canada Day parade in Kemptville (hopefully without the rain their last year). They will also be conducting their annual fundraising barbecue as part of the Canada Day festivities in Maplewood Park in Oxford Mills. Their 50/50 draw will follow there at 3 pm. 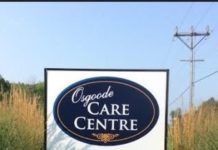 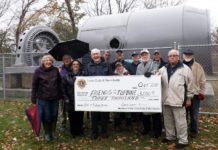