Greetings from small town America! Right now, I am sitting on a boat along the banks of the Mohawk River on a stretch of the Erie Canal. About a week ago, I ventured off with my parents on the maiden voyage of a boat they bought in Quebec, to bring it to their home base in Kingston, Ontario.

Over the past week we’ve stopped in several places along the Champlain and Erie Canals, all relatively small and some more affluent and lively than others. The town of Plattsburgh, New York (the first stop on our trip) boasted some magnificent buildings and churches, as well as many lively watering holes along the main drag. Bolstered by a college nearby, the town is hardly a booming metropolis, but there seemed to be some life to it, which is more than I can say for a few of the other towns we’ve stopped in.

Currently, we have been stranded for a day, due to engine trouble, in a town called Amsterdam, New York. This is a town with a rich history, but its streets long for days gone by. After venturing out to explore and find provisions, we found most of the shops along the main street closed, or boarded up. A large mall that used to be filled with retail stores now houses a few sparse offices.

The really interesting thing about the town, though, is a bridge. It’s a beautiful pedestrian bridge that crosses the Mohawk River, joining the two sides of town. Finished in 2016, the Mohawk Valley Gateway Overlook Pedestrian Bridge is nicely landscaped and maintained and has many plaques along the sides telling the fascinating history of the city. There have been artifacts found along the river from native peoples that date back thousands of years, but the first Europeans to settle in the area were Dutch, in 1710, hence the name Amsterdam. The completion of the Erie Canal in 1825 caused an economic boom in the city, which was a major manufacturing centre. Beautiful carpets and other textiles were made in Amsterdam and shipped all over the United States. One particularly intricate carpet was made for the famous Waldorf Astoria Hotel in New York City.

The bridge itself is a beacon of hope for locals, crossing their fingers that it will help lift the downtown out of the slump, probably triggered by the creation of railways and highways, loss of industry, and the building of big box stores just outside of town. The bridge was funded primarily by a $16.5 million allocation by the Rebuild and Renew New York Transportation Bond Act of 2005, with another $1 million in state funds given to complete the artistic elements. The owner of Gina -Marie’s Cake Boutique in Amsterdam told the Times Union newspaper in 2016 that she hoped the bridge would entice people over to her side of the river and allow her to operate regular store hours, instead of by appointment only.

Amsterdam is a much bigger town than Kemptville, but, thinking about its history, I can’t help but see some similarities. Both have bodies of water running through it that were once the economic drivers of the towns, and both downtowns have suffered the consequences of modernization and the “Walmart effect.” Although I found walking through downtown Amsterdam quite depressing, I will say that the pedestrian bridge, that is still less than a year old, shows that the people of Amsterdam have not given up hope. Where there is a will, there is a way, and there are evidently people in this city that care deeply about its past, as well as its future. They see value in doing things to revive it, and not standing idly by as it continues to waste away into ruin.

I’m not saying we need to build a $17 million bridge in Kemptville. I am saying that we need to place the same sort of value on our heritage and downtown. It was what makes towns and cities unique, and, as I travel to more small towns in the U.S., it is something that I am even more convinced of. Walmart is Walmart, wherever you go; but there is only one Gina-Marie’s Cake Boutique, and that’s worth fighting for. 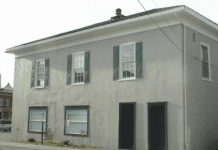 A tale of two Buildings