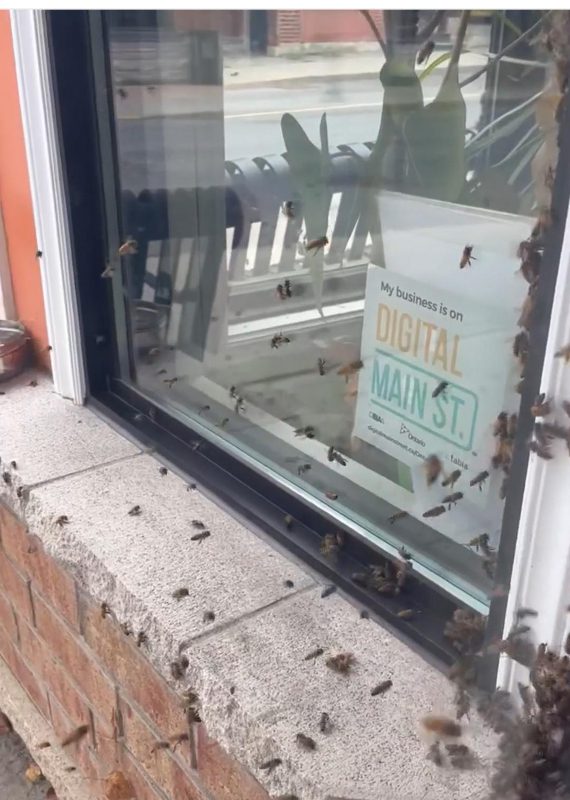 On Tuesday morning a swarm of honey bees were spotted at the front of the Bodhi Tree Yoga studio. A few hundred bees were buzzing around the studio for a few hours while Om Shanti Charlebois was giving her yoga lesson. A local Bee Keeper came to check the colony and confirmed there was no queen found. The colony must have split and were looking for a new location.

According to a Bee website, swarming is a natural event in the life of a bee colony as well as when the bee numbers are rapidly increasing. It’s also a good sign, indicating that the hive is strong enough to split. Usually the Old Queen and two thirds of the bees leave the old hive behind to search for a new home. Prior to leaving the old hive, they will make several new queen cells, so a new Queen will be born and take over the remaining hive.

The role of the queen bee is vital as she is the only bee capable of laying fertilized eggs. These eggs will become female bees, generally workers or turned into a queen. The unfertilized eggs will only be male bees, also known as drones; which is why if the worker bees start laying eggs, they will only be males. Queen bees would be fed the royal jelly. This is a honey bee secretion that is used in the nutrition of larvae and adult queens. The secretion comes from the hypo-pharynx of nurse bees.

Until the Bee movie came out, I did not realize that bees are all assigned different jobs in the colony. The number of bees in a colony depends upon seasonal changes and could reach up to 80,000 in an active season.

Om Shanti was hoping that there was a spiritual connection. According to the www.buzzaboutbees.com website, they are seen to symbolize industry, to bring messages from the Divine, to set an example, to be associated with the soul, and to bring the blessing of fertility. This means there will certainly be a follow up with Bodhi tree to see if this swarming brought any good fortune.