Kemptville, seeking to revel with redemption in Cornwall Thursday evening after dropping two to the Colts, were fired up to find satisfaction and post a 4 to 1 victory.

Cornwall drew first blood when Kemptville rode the pine and Kobe Tallman PPG with helpers from Garnier and Gagnon to beat Jacob Biron at 7:45.

Just :30 into the second as Hunter Brazier on an aggressive attack for his seventh of the season put it behind Colts Dax Easter to knot it at one. Bennett on PP sliding up the wall onto the tape of Thomas to reverse to Nathan Merrett PPG on the line at 15:40 for 73’s tiebreaker. Campeau break away combined with Merrett on the point to have Carter Vollett pump in the insurance goal at 17:33.

Cornwall, with man advantage to start the final twenty miler, was shut down by the 73’s and the Colts pulled their stopper at 18:03. Palmer sprung Chase Lammi ENG through the neutral zone to slip into the vacant net for his 11th goal of the season at 19:37.

A special energized, exciting, Friday evening with Kemptville Royal LePage Team Realty and Santa Claus present to collect toys for their Mountain of Toys Drive as the Carleton Place Canadians face Kemptville for the second time. A seesaw battle from the drop of the puck as Kemptville dominated Carleton Place, only to be plagued by undisciplined play to have to put it to bed with a 5 – 4 shootout win.

Kemptville came out hot firing on all cylinders with Lammi and Trottier on the fly to Patrick Haughian pinching the crease to rifle it past Jackson Pundyk at 5:33 in the first. Palmer tic tac toe with Thomas to find Tyler Kelly in the lane to make it 2 zip for Kemptville at 6:48. Carleton Place pulled their stopper without results at 19:57.

The 73’s on the attack with the combination of Logue with Vollett dishing it over to Benjamin Campeau to chip it high for a three goal lead at 2:57 to start the second stanza. Canadians spoiled Jacob Biron SO when Matteo Disipio with assists from Colangelo and Hamilton at 15:48. Kemptville with a man advantage when Braziers spinorama from the trenches to keep the play alive, across to Thomas and Nicholas Bennett PPG to flip it over the stopper’s shoulder at 16:10.

The 73’s dug themselves a hole with sin bin visits and the Canadians capitalized with three unanswered markers to open the last twenty. Kemptville misjudged a clearing attempt as Prudhomme stormed the net and Matteo Disipio whacked in his second to launch the comeback for Carleton Place at 1:07. The Canadians had a 5 to 3 advantage when Brandon Walker PPG with helpers from Hamilton and Ryan moved them within one. The Canadians pulled Pudnyk at 18:18 and the 73’s weathered the storm. While on the back end of the PP, Matteo Disipio PPG from Hamilton posted his hat trick after swarming the blue paint to tie it at three and force OT at 19:51. OT closed out scoreless to set up the dreaded shootout to decide this exciting excursion for over three hundred fans. Carleton Place received the honours for the first shooter as Matteo Disipio, Derek Hamilton penetrated the line and Jacob Biron stood tall to stone Caton Ryan. Kemptville with focus as Nicholas Bennett, Emile Trottier and Hunter Brazier lifted it top shelf past Jackson Pundyk to award them a 5 – 4 victory.  Carleton Place outshot Kemptville by 41 to 40 with 2 of 6 on PP and Kemptville resulting 1 on 1 PP.

Road trip into Nepean for a Sunday matinee rematch with the Raiders that are suffering two losses from their previous encounters and wanting double redemption. Kemptville would make it a clean sweep of three games with a 2 – 0 win and Jacob Biron recording his second shutout for the season. Initial twenty remained scoreless with 1 unsuccessful PP for either side. Kemptville got on the board in the first minute of the second at :57 when Lammi dropped it back to Thomas through the neutral zone and Khaden Henry buried it behind Gage Stewart. The Raiders on a final push for the last twenty miler received a four minute penalty at 5:03 that they survived. Then at 14:55 they received a five major that the 73’s pounced on when Thomas walked the line to Hunter Brazier PPG in the rocking chair at 15:56. Kemptville peppered Nepean 43 to 30 with 1 of 4 PP and Nepean 3 PP without results.

Hawkesbury Hawks will land in 73’s barn for a Tuesday, December 6 evening contest. Hockey with EDGE…see you around the wall.

73’s need to overcome the slump 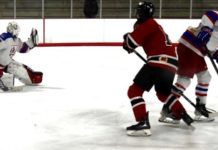