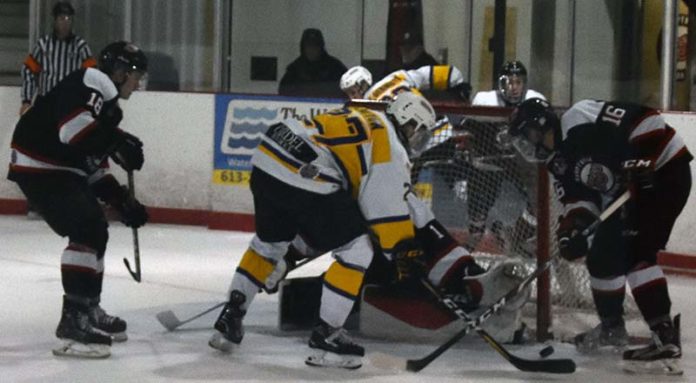 Kemptville 73’s motored down the valley to visit the Lumber Kings, seeking revenge in Pembroke for the second battle of the season at 7 pm on Sunday evening to pullout a 5 – 1 win. Kemptville opened the initial twenty when Dick combined with Madoka Suzuki to beat Reese Proulx at 17:36. Whittaker found Carter Vollett to find the back of the net at 18:35 to give the boys a two point lead. Kemptville outshot Pembroke 13 – 11, with each having one PP without results.

Second session was controlled by Kemptville, as Suzuki took the draw over to Hunter Brazier to rifle it between the posts at 1:21. Patterson initiated a PP when he sprung Taylor free, up the line, then back to Gavin Wood with a missile from the point for PPG at 11:02. Then, at 19:59, Blair Bottochio, with helpers from Stockfish and Kirkby, that spoiled William Anderson SO attempt. 73’s slammed Lumber Kings 19 to 11, with both clubs receiving 6 PP, and Kemptville counted 1 PPG, as Pembroke couldn’t capitalize.

Last twenty, with both teams battling wide open end to end and, finally, Pembroke pulled their stopper at 16:47 and Chase Lammi dumped in a EN at 17:10. Pembroke SOG 9, with Kemptville 5, as Lumber Kings 2 and 73’s 1 with no results. 73’s maintained the pace to take ownership for the three periods. William Anderson with the PK helped Kemptville 73’s to bounce back after their loss on Friday night to record a 5-1 victory.

After the 4-to-zip spanking Kemptville received from the Carleton Place Canadians, they were looking to have a better showing on Friday night in front of their home town fans.
Kemptville came out flying, taking 75% of draws, controlling the half wall, and nailing the opposition whenever they touched the rubber. They implemented their game plan with the defence quick tape-on-tape relay to spring the offence over the neutral zone and push their speed for 60 minutes. Mitchell pumped it ahead to Whittaker to find Easton Ryan in the slot to flip it top shelf over Addison Lawrence at 5:09 to put Kemptville on the board. 73’s spent most of the first in Canadians’ zone, shutting down the break-out attempts, with Kemptville having 10 SOG and Carleton Place recording 11 and 1 PP attempt, with 73’s two opportunities without results.

Second session remained scoreless, with Kemptville gaining 9 SOG to Carleton Place 7, and 73’s 2 PP and Canadians 1 without results. After every whistle, Carleton Place whacked at the upper body like they were chopping down trees to cause injury.

Mitchell sprung Broda free to drive behind the net, as he threaded it to Chase Lammi to slam it home at 3:42 to give Kemptville a 2-goal spread. Carleton Place spoiled William Anderson’s SO when Patton held it in across to Code, then back to point for a rapid rifle from Ayo Adenlye through a crowd of bodies at 4:28. A defensive error at the side of net, as Cameron Patton over-powered his defenders with helpers from McDermott and Mosley at 5:25 to even it up at 2. Third ended with a tie to force OT, with Canadians blasting the 73’s 19 to 7 and having 1 PP without capitalizing.

OT opened with furious end-to-end action, until the aggressive play of Carleton Place gave Kemptville a man advantage at 2:08. Dick wheeled out through the neutral zone to Suzuki, onto the stick of Ryan Pawlikowski PPG on the doorstep under sprawling stopper to give Kemptville a 3 to 2 victory at 3:34. 73’s hammered 8 SOG to Canadians’ 3, with Kemptville counting a PP attempt.

Kanata Lasers will be on Kemptville 73’s ice surface for a battle on Sunday afternoon at 2:00 pm.

Your 73’s wrap up their exhibition contests