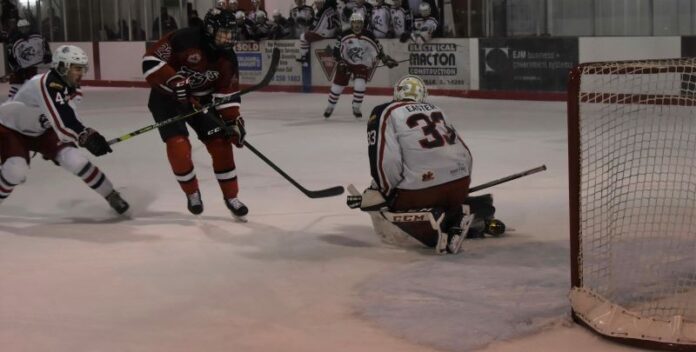 Brockville Braves come to town for a Sunday matinee, to give notice and force Kemptville 73’s to chase the game for the three twenties. The 73’s outgunned the Braves by 33 to 18 SOG and couldn’t buy a goal, even if it was a BOGO sale.

Brockville drew first blood when Caleb Keane, assisted by Thomas and Donovan, put it behind Tyler Laureault at 12:29 to open the first. Lapier chipped it along the wall to Campeau, and Adam Cavallin buried the garbage top shelf by Sami Molu to even it at 7:19 of the second.

The last twenty, Kemptville chased the period, as Owen Belisle, with assists from Elliott and Boucher, pumped in the tie breaker at 2:59. Brockville with man advantage moved ahead with Ryan Bonfield PPG and helpers from Boucher and Haynes at 8:59. Kemptville pulled their stopper at 18:45 and 19:39 without success and had to suffer a 3-1 loss.

A devastating shot that ricocheted off the wall into the face of Devon Savignac caused great concern for the 73’s during the end of the third. 73’s PK was on target, but really needed to ignite their PP’s and avoid undisciplined time in the sin bin.

Cornwall Colts struck first to open Friday’s evening battle, when Kemptville defensive over play allowed Shaw with Miron to spring Emerick Nadeau, to beat Tyler Laureault at :59. Campeau cycled low back to Houle on point to rifle it at the net, and Adam Cavallin tipped it past Dax Easter for a tie at 5:20. At 14:45, Larkin combined with Haughian off the line, and Hunter Brazier would bury it top shelf to break the tie. Chase Lammi exhibited his grit when he captured a cleaning attempt, to turn Colt’s “D” inside out and breach the five hole at 18:43 for the go ahead.

Cornwall replaced their stopper with Alex Houston to start the second, with Kemptville still red hot as they notched three more. Merrett penetrated the zone with Brazier, over to Devon Savignac in the slot to find open space at :41. O’Doherty pass and go to Logue with Brendan Lynch perched in the lane to drive it home at 2:16. Lauriault heads up action up the wing so Houle could send a breakaway stretch pass for Hunter Brazier for his second of the night at 19:24.

Final stanza, with Kemptville having to stave off 4 PP attempts by Cornwall until Keanu Krenn, with a helper from Fournier, to stop the bleeding.

See you around the boards on Wednesday evening with a 7 pm start to face the Rockland Nationals.

73’s need to overcome the slump