Monday matinee was the final chance for the 73’s to post a mark in the win column as they faced the Ottawa Junior Senators. Unfortunately, the Junior Senators foiled their attempt as they squeezed a 3 to 2 victory.

Ottawa counted first with a PPG from Massimo Gentile, assisted from Velocci and Sorensen to beat Conor Blackwood at 6:00. Kemptville outshot Ottawa 8 to 6 to trail their opponent by one.

73’s Lammi combined with Logue to find Ty Whyte in the slot to put it behind Connor Shipley at 19:40 to tie it at one all. Kemptville continued to outgun Ottawa by 17 to 7.

In the early final twenty, Emile Villiard with helpers from Gentile and Utoro to direct it past 73’s replacement Jacob Biron at 1:13 for tiebreaker. Emile Trottier with a solo effort to give Kemptville a tie at 3:44. Junior Senators bounced back with Velocci to Anton Sorensen to award them a 3 to 2 win. Ottawa posted 16 to 12 SOG, with one PPG on three attempts and Kemptville getting blanked with five opportunities.

Kemptville back home to meet the Renfrew Wolves on Friday night was met with another loss as they clawed back to force OT and 6 to 5 defeat.

The 73’s found themselves in the sin bin for 8 minutes of the initial frame falling  behind the Wolves by two. Elvis Slack assisted from Waivada and Tomasini to find five hole of Jacob Biron at 10:07 to put Renfrew on the board. The Wolves with second from Noah Vom Scheidt assisted from Grainger and Hylands at 10:54 to end the first. Renfrew recorded 14 to 10 SOG to put Kemptville in a hole.

The Wolves opened the second at :19 when Slack and Waivada found Tyson Tomasini to make it a 3 zip lead. Chase Lammi with Trottier off the wall, over to Brazier to spoil Ian Michelone SO attempt at 6:41, Grainger to Jamie Hylands at 9:51 to dig a 4 to 1 hole for Kemptville. The 73’s clawed back when Kelly worked the trenches to feather to Warner reversed to Patrick Haughian on the line with quick snap at 14:06 to close the second 4 – 2. Renfrew on top with 14 to 8 SOG.

Kemptville made a big push in the third with man advantage when Fennell held the line over to Campeau so Grady Logue PPG could pump it in at 3:12. Joey Kennelly assisted from Choueiri and Hylands for the Wolves at 4:23. Houle up the half boards to Benjamin Campeau to move the 73’s within one at 13:23. Kemptville pulled their stopper for extra attacker when the spark plug Hunter Brazier back in the lineup after a D combination from Yakubowski with Houle forced OT at 19:58. Kemptville forced the play by out gunning Renfrew 16 to 6 to climb out of a hole.

The OT was short lived as the Wolves capitalized when Noah Vom Scheidt with helpers from Grainger and Slack found the back of the net at 1:43 to squeak a 6 to 5 win. Kemptville never engaged the net with Renfrew having two SOG.

The 73’s next home game will be on Friday, October 21 at 7:30 when the Rockland Nationals are here for the first time this year. 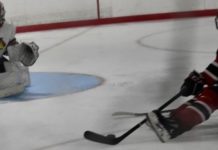 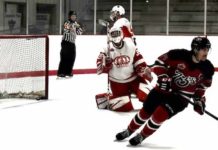 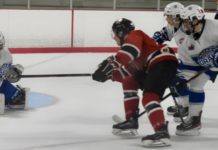