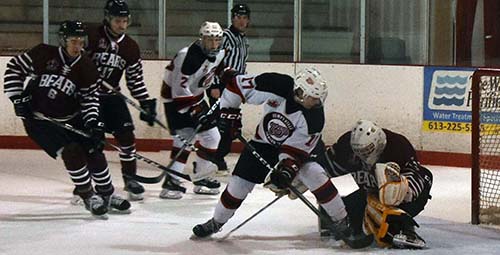 The Boys of Winter motored into Pembroke to face the Lumber Kings for a Sunday evening battle where they suffered a 3-2 loss. Lumber Kings came on strong to open the initial period, as Dennis Golovatchev, with helper from Holy, to beat William Anderson at 3:36. Jacob Shankar, with assists from Anderson and Egan, to put Pembroke ahead by two zip at 17:56. Pembroke had one SOG advantage, 14-13 with 2 unsuccessful PP.

Second stanza, with Kemptville down a man at 17:00, Chase Broda stole the play to break over the line and hammer it by Reece Proulx for SHG and spoil his SO. 73’s took it to Lumber Kings 15-10, and each with PP without results.

Final twenty, Kemptville’s Moretti combined with Wood to rifle a shot, so Madoka Suzuki could pounce on the rebound for the tie at 14:35. Pembroke broke the tie when Cameron Hough, with assists from Stockfish and Egan, to give them a 3-2 win at 16:11. Kemptville with 11-8 SOG and Pembroke 2 PP attempts.

Smiths Falls in our barn for back-to-back contest on Thursday night was a bad game, as Kemptville received another lopsided loss of 8-2. Kemptville, with a man in the sin-bin, struck first, as Nicholas Domitrovic’s aggressive defense, launched a heavy-handed one over Jake Smith for SHG at 9:36 for his first goal of the season. Bears countered at 13:53, when Thomas Quick, with helpers from Helmer and McKenney, punched it by William Anderson to even it at one. Smiths Falls broke the tie at 18:13, when Cameron McLean, with helpers from Lewis and Richardson, found the back of the net. Smiths Falls outshot Kemptville 12-7 with 2 PP attempts.

Smiths Falls Bears on the prowl to slam in six unanswered goals to open the flood gates. Alex Lewis, after receiving dump from Richardson at 1:09. Brent Broaders, assisted by Lewis to make it 4-1 at 5:52. Sloan with Helmer to setup Justin Trudel to chase 73’s Anderson to the showers at 6:51. Bears came on strong when Alex Lewis counted his second, as Richardson and Broaders found him open to dump it in by Riley McCabe at 8:00. Smiths Falls still on a roll with man advantage when Tate Leeson PPG, with helpers from Richardson and McLean at 11:00. Broaders and Lewis combined to award Ryan Richardson with a marker at 13:55. Smiths Falls doubled up on Kemptville 18-9, with 5 PP, resulting in 1, with 73’s having 1 unsuccessful PP.

Last twenty, with Anderson back between pipes for Kemptville and Smith Falls on constant attack, the 73’s tried to claw back. PK for Kemptville had to play hard as two more slab time sittings to give Bears PP opportunities, and 73’s Cole Dennison pulled his magic to mark up a SHG at 2:42. Smiths Falls doubled down with 12-5 advantage with two attempted PP’s. Finally the bleeding was stopped for the 73’s to end the battle with a 8-2 loss.

Back-to-back games, as Kemptville 73’s entered the den of the Smiths Falls Bears on Friday evening to impose their will, after their Thursday night slaughter. The Bears were hungry to close out their two contests against their rival 73’s to walk away with a 5-3 victory.

Kemptville drew first blood when short handed, as Domitovic controlled the attack from Smiths Falls with a quick transition to Makado Suzuki for SHG to beat Victor Desjardins at 16:42. Kemptville outshot Smiths Falls by 12-8, with 1 failed PP and Bears with 2 unsuccessful attempts.

Kemptville capitalized while down a man to open the second, as Dennison sprung Chase Broda through the neutral zone to rifle it between the pegs for another SHG at 5:28. Justin Trudel, with helpers from Martin and Russett, shut down Riley McCabe’s SO attempt to put the Bears on the board at 10:48. Brent Boaders, with assists from Helmer and Richardson, gave Smiths Falls the tie at 12:53. Kemptville responded to break the tie when Broda, with line-mate Domitrovic, to setup Jeff Taylor drifting through the middle at 13:22. Bears only managed 2 extra SOG at 12-10, and each club 2 declined PP’s.

Third final period totally controlled by Smiths Falls, as Kemptville took their foot off the throttle to allow them to get back in the game. Smiths Falls evened it up, as Broaders and Helmer to Ryan Richardson criss-crossing over the line at 12:08. Tate Leeson from Helmer to give the go ahead to the Bears at 18:44. 73’s pulled their stopper at 19:21 for extra attacker and force OT. Unfortunately, Smiths Falls found the empty net when Trudel gained control of the puck to Dempsey, on to Brent Broaders for his second of evening. Bears with 14-7 SOG and no PP to end the game with 5-3 win.

Coach Peters summed it up with: “Unfortunately, Thursday we were off our game and fell into some bad habits, playing soft, and allowed too much space and time for Smiths Falls to get their offence going. The second period was a complete collapse in our structure and commitment to our identity. Our leaders took over in the third and pushed us through to the end of the game. Not a game anyone wants to see repeated. Friday, after a players only meeting, the team came out with a balanced, focussed level of emotion. Our commitment to playing the right way returned. It was our game, controlling nearly all the play. We had several quality opportunities to finish them, but we didn’t convert. They pushed hard in the second half of the third with success, but ran out of time”.

Diggers Award goes to Nicholas Domitrovic for his continuous effort and attitude.

Kemptville 73′ s will host the Navan Grads for a Friday, February 7 evening battle at 7:30.

Your 73’s wrap up their exhibition contests