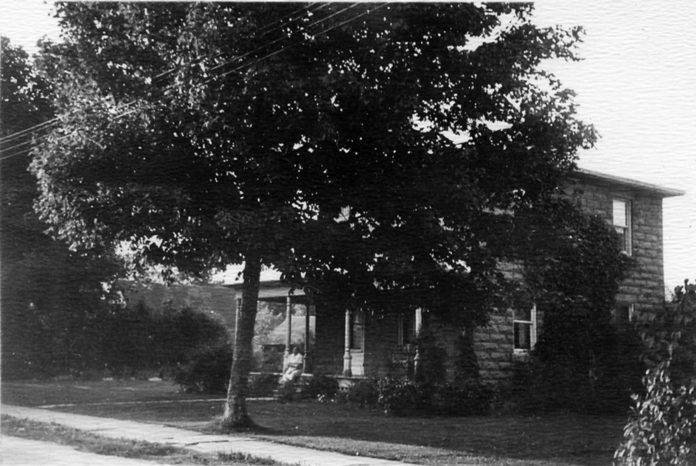 Every house has story: a tale of families who built it, lived in it, raised families and filled it with life. The house in the picture was built in 1910 and has been a feature of Oxford Mills since then, seeing many changes in the village, and even on the street on which it stands. Across the road was the Orange Hall and the McGee hotel. General stores rose up and burned down beside it. The property consists of lots 10 and 12, Water Street, as well as part of lot 15 on Main Street. Lot 12 was the first lot sold in the newly-surveyed village in 1849. It was bought by Moses Lefaver, a blacksmith, who bought the lot across the road where he built his smithy. This is the building with the chalk drawing of a horse’s head, now covered with vinyl siding

Lots 10 and 12 remained under separate ownership until 1910. The houses on the two lots were owned by widows and both burned down in 1909. James W. Fretwell, who owned the cheese factory by the bridge, bought the two lots. The local newspaper reported on August 25, 1910:

He began to build this house in September, 1910. The newspaper was keeping everyone up to date on developments. On September 15, it noted that “Mr. W. Fretwell has started to dig the cellar for his new house”.

On December 1, 1910, the paper reported that: “Mr. W. Fretwell is erecting a beautiful residence of concrete with iron roof on the lots formerly owned by Mrs. Edwards and Mrs. Gilmour. He expects to have it ready for living in by Christmas”.

Fretwell had bought the one of the two vacant lots for $75 but there seems to be record of what he paid for the other.

When Walter died in 1954, his widow, Jessie, sold the house. There is a wonderful collection of photographs taken by the Hargraves over the decades they lived here.

Now almost 108 years old, this home and the land it’s built on, has seen a lot of history and has many stories to tell.